A Thokcha is an amulet composed of tektites and meteorites.

Typically iron-rich, it is believed to possess a magical, protective power similar to that of Tibetan Dzi beads. The majority of Thokchas are composed of a copper alloy.

In Tibet, every village has at least one smith (Tibetan: tök-tök, or pho-pho) who forges Thokchas for business and religious purposes. They are considered protectors of wealth and good luck and are given to friends, family, and spirits. Smaller ones are often worn as jewellery; larger ones are placed in shrines as an offering to the Tibetan pantheon.

Tibetan Thokchas are made of various metals, such as iron, brass, silver and gold. The metal is infused into the Thokcha’s core, a semiprecious stone, e.g., topaz or turquoise. The stone is carved and, in 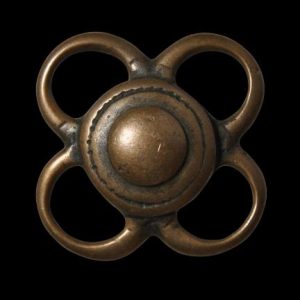 some cases, drilled to make it lighter and easier to wear.

In Nepal Bhasa they’re usually worn to protect against evils and bring good luck. They are made from various materials, including precious metals such as gold, silver, brass and copper; semiprecious stones; shells; ivory; and animal bones
.
Thokchas are also made using beads that are carved and dyed in various designs (e.g., a collection of crystals), polished or rasped (“k’u-tses”) on the surface to impart colour. The beaded variety has a core of clay or metal. The beads are strung on a cord and worn, usually around the neck.

A large Nepal Thokcha will sometimes have a metal case to protect it and make it easier to wear. This case is also carved and drilled to add lightness; this type of Thokcha is called “k’u-chu”.

Some Thokchas also come in a locket. A locket with slots for multiple Thokchas is called a “gombu”, meaning “small house.” The gombus are set in rows within the locket, which can be worn with silk cords or leather straps. The Thokcha is usually suspended from the cables or straps, so the whole piece hangs from a chain around the neck or elsewhere.

Tibetan Thokcha is often embossed with inscriptions or designs. These inscriptions are believed to be protective and can sometimes be prayers to protect the wearer from harm and illness. Some Thokchas carry inscriptions that warn against crossing into dangerous places, such as “Don’t enter.” Others warn against evil ways of thinking or behaving, including “If you don’t behave yourself, you will have bad luck” and “Don’t kill.”