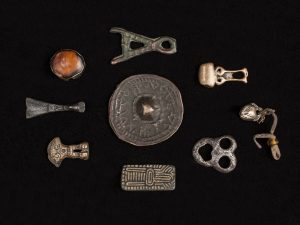 Thokcha are tektites and meteorites which serve as amulets. Typically high in iron content, these are traditionally believed to contain a magical, protective power comparable to Tibetan dzi beads. Most thokcha are made of a copper alloy.

Thokcha also called ‘sky-iron’ are meteorites which are often very high in iron content – like an iron meteorite. The usage of thokcha meteoric iron is common in the history of iron metallurgy.

Historically, thokchas were held in high regard and respect for fabrication of weapons, musical instruments and sacred tools such as the phurba. Sky Iron has also come to describe ancient metal objects which serve as amulets made from thokcha.

They are believed to be endowed with magic and protective powers. Thokchas are often small ancient and sacred objects that went on to serve as votive talismans – and they were valued high for their magical properties. Usually they are of bronze or copper alloy. Some might also contain some meteoric metal.

People in Tibet highly prized and valued thokcha, and would wear them to protect them and to absorb evil. They were usually hung from the neck – or attached to clothing. They were also sewn onto amulet pouches or attached to religious articles. Thokchas were also used by Tibetan sharmans – healers, spirit-mediums and magicians – as part of their ‘tools’ of trade. Tokchas were often sold on, or passed down, through the generations. Accordingly – genuine and powerful thokchas should show a great deal of wear.