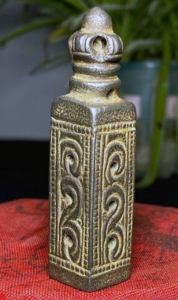 Thokcha is often defined as small copper alloy objects of various functions and come from all sorts of sources. The smaller of the Thokcha pieces are used as amulets which size vary between 2-1/2 centimetres and 8 centimetres in length.

Most Thokcha carvings are smaller and used as amulets. However, there are some larger artifacts that are carved from bigger Thokcha material and can be called Thokcha Carvings.

Where does the word Tiberian Thokcha come from?

It is a derivative of the Tibetan thog that means first, primordial, thunderbolt – and lcags meaning iron and metal. So we can safely translate Thokcha as “first metal” or “thunderbolt iron”. The mythical explanation is that Thokchas were formed when molten thunderbolts struck the ground and had an interaction with the ground’s moisture.

As artifacts, Thokchas often describe any copper alloy object that became to take on talismanic properties. Most Thokcha we find today are of the smaller kind, items that were specifically created to be worn as personal amulets. It should be noted that Thokcha amulets are often showing certain deities and religious symbols as well.